I spent the last several days writing up A&S documentation for two items I plan to exhibit at an Athena’s Thimble panel later this month at Birka, an event in southern NH.

The first was the write-up for the pouch and goldwork I created last month. (See my blog entries in December for the Or Nue Heraldic Bee project.) 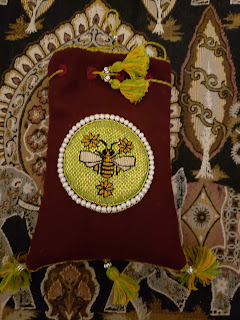 The East has a very nicely codified rubric for judging A&S projects that gives entrants a clear expectation of how their project will be judged, and also helps ensure consistent judging from one project or event to another. I found a useful write-up with suggestions about how to write documentation for the East Kingdom A&S rubric.

It had been some time since I last wrote up a paper like this, so it took me a while to get into the swing of things. But, based on the rubric and the article I mentioned above, I eventually came up with a documentation format that includes:

Based on this, I created this documentation for the pouch project, and was pretty happy with the result.
Once that was done, I felt I was on a roll, and decided to write up the griffin embroidery sampler I created a number of years ago. This recently got a very warm reception in the populace vote at Autumn’s Inspirations, but the A&S score on it was a bit low because I had no formal documentation accompanying it. I decided to enter the display at the last minute at that event, so I hadn’t brought any documentation with me. 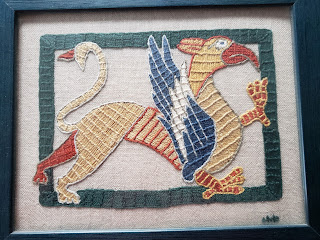 The format I created above leant itself well to describing this project as well. I was able to write this up pretty quickly, as it was quite a bit simpler in A&S scope. It wasn’t really ever created with the intent of entering it into an A&S competition, so I’m not terribly concerned about that. But, as I am planning to panel this for competency in Laidwork, the write-up will be useful. My documentation for this project can be found here.

It will be interesting to see how this documentation is received by the judges at Birka. I’m sure I’ll get feedback that will allow me to improve both my future projects and future papers.