For today’s post, I’d like to present a decorative embroidered griffin, worked in a laid and couched stitch commonly referred to as the Bayeux stitch. I created this piece to practice the stitch prior to the first time I taught the stitch at Warriors and Warlords, an event in the Kingdom of Northshield, where the griffin is one of the populace badges. The embroidery has since been framed for display in my house. Overall, this project took approximately 25 hours to complete. 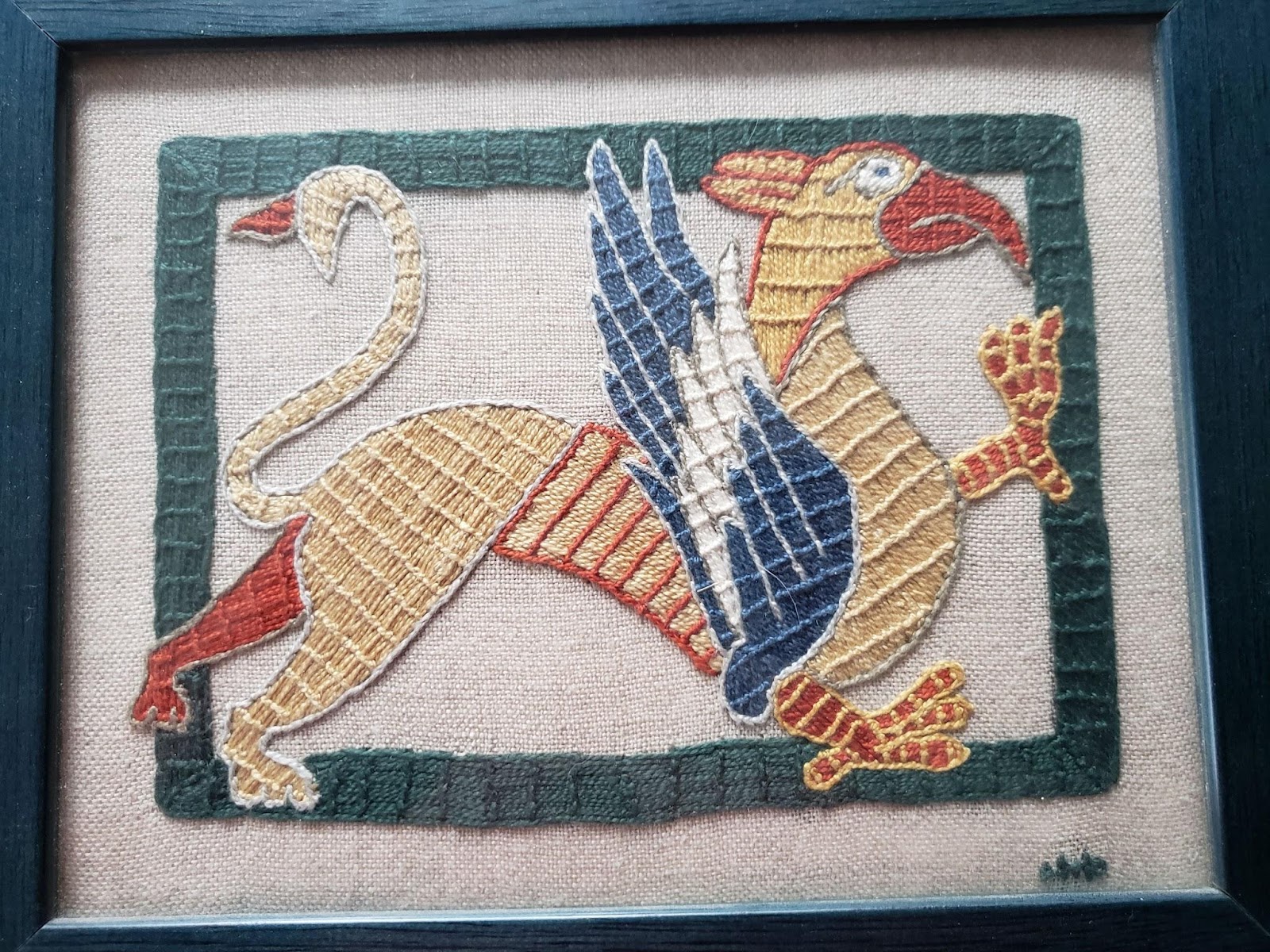 Laidwork embroidery, where the threads are laid across the surface of the work and then couched into place, has many forms throughout the medieval period. Bayeux stitch is so-called because of the particular Anglo-Saxon variation that was used by English needleworkers in the late 11th century to produce the Bayeux Tapestry commemorating the lead up to and Norman victory in the Battle of Hastings in 1066. Although few other pieces remain from the medieval period demonstrating this stitch in use, the skill of execution seen on the Bayeux tapestry suggests to me that the stitch was already in common use by the time that work was created. Its sturdiness and economic use of dyed thread would have made it an ideal choice for decorating a wide range of items, potentially even clothing.

An almost identical stitch called refilsaumur or refil embroidery was seen in use in Iceland in the 15th and 16th centuries. Several extant items are decorated using this technique, including several altar frontals and a large wall hanging. (Gudjónsson, 14-19). Here again, the use of laid and couched stitch seems to be primarily focused on decorative items, although Gudjónsson does mention that the cross orphrey on a chasuble is seen using this style (14). It’s interesting to note that artistic style in refilsaumur is visually quite similar to the artistic style in the Bayeux tapestry, despite the centuries dividing these two cultures.

Note that both the Bayeux Tapestry and the Icelandic works in refilsaumur use stem stitch to outline the designs. This covers the edge of the laid and couched work, and was typically done in an alternate color such as black to provide a contrasting outline to each element in the design. On the Icelandic works, some elements were also outlined using metallic gold thread, notably the crozier heads in the image above.

The embroidery was worked using:

The design for this embroidery was a cartoon hand-drawn by me, inspired by a number of medieval bestiary entries for the griffin. The griffin was often depicted holding and eating horses, but I excluded that design element for this work. The image was transferred onto the linen fabric, and then I was ready to start embroidering.

For each section of the image, I used Bayeux laid and couched stitch to fill the area. The laid stitches were laid down in parallel rows along the longest axis of the area.  The couching stitches were then laid down perpendicular to the laid stitches and tacked down in rows about 5 cm apart. The couching stitches in period works were typically in the same color as the laid stitches, but a few areas can be seen where the couching stitches are in a contrasting color; as such, I experimented with this option in a few areas (e.g, the griffin’s chest). In the griffin’s tail, I used a period technique to work the embroidery around curves. The laid stitches are placed in wedges still following the direction of the curve. The couched stitches for each wedge are perpendicular to the laid stitches, resulting in a “fan” of radial couching lines. A similar approach was used on the Bayeux Tapestry as well for curved areas. The colors used are used more to show contrast between adjacent elements, rather than with a slavish attention to realistic depiction, as was also common in the Bayeux Tapestry.  The background of the work was left mostly bare, as was also done in the Tapestry.

One lesson learned in this piece is that the use of perl or crewel yarn makes the embroidery rather dense and thick. I was using hoop frames at the time, and found that when I had to move the frame, the thickness of completed embroidery could make tensioning the frame difficult for unworked areas. This resulted in the waviness seen in the border around the griffin. For future items, I would use a scroll frame or slate frame instead, which will better handle tension for larger items like this that are larger than a typical hoop frame.

I liked the final result and have taught Bayeux stitch now at several events in Northshield and East Kingdoms since completing this item.