My second piece of goldwork was a heraldic pouch I made for then Queen Æsa of Northshield, using her personal device as a design. I was inspired to work on this when I first saw a drawing of her device, which had just recently been approved. The frog was just begging to be done in goldwork.

This picture is a closeup of the Or nue and brick-patterned goldwork embroidery. The frog is carried out in a basket-weave pattern. 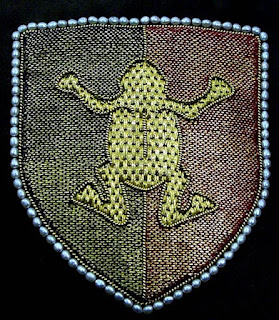 Worked in Japan gold, and blue and red silk on blue and red velvet ground, appliqued onto faux suede. The frog emblem has several layers of wool felt padding under the embroidery to “poof” it up. The frog is outlined with gold pearl purl, and the device is outlined in freshwater pearls.

I entered this piece in an Arts and Sciences competition at Warriors and Warlords, where it took first place. After the competition, one of the other entrants, Master Gevehard von Baden, told me he was the herald who had come up with the “splatty frog” design! We had a good laugh over that.