Today’s post is a translation of a chapter from Jewelry of Medieval Novgorod by M.V. Sedova, an overview of jewelry found in archeological digs around the medieval city of Novgorod. Translations of other chapters can be found using the table of contents below. This chapter describes torcs (shejnye grivny) that have been uncovered in Novgorod.

[Translator’s notes: I’ve done my best to convey both the meaning and style from the original. Comments in square brackets and footnotes labeled “jeb” are my own. This document may contain specialized vocabulary related to embroidery, archeology, Eastern Orthodoxy, or Russian history; see this vocabulary list for assistance with some of these terms. This translation was done for my own personal education, and is provided here as a free resource for members of the Society for Creative Anachronism who may be interested in this topic but are unable to read Russian. I receive no compensation or income for this work. If you like this translation, please take a look at other translations I have made available on my blog.]

[The article in the original Russian can be found here:
http://www.archaeology.ru/Download/Sedova/Sedova_1981_Iuvelirnye.pdf. ]

Torcs are metallic hoops, worn around the neck as decoration, and made of bronze, billon, or silver. They are found extremely rarely amongst Russian antiquities. In burial mounds, they are typically found in the graves of women. Judging from treasure troves from the 10th-13th centuries, they were a common decoration of the royal/boyar class.[1]Fekhner, M.V. “Shejnye grivny.” Ocherki po istorii russkoj derevni X-XIII vv. Trudy GIM, 1967 (43). pp. 55-74, Illus 7, 2. Torcs are rarely found in the cultural layer of settlements. In Novgorod, out of all of the years of digs, only four fragments of torcs have been uncovered. [2]jeb: This is perhaps not surprising. Grivny were used as a way to show off as well as to carry one’s currency. They were used as form of payment, and as such are the origin of name of Ukraine’s currency, the hryvnia. Moreover, chunks could be “hacked” from a grivna as payment in smaller amounts; the Russian verb “to hack” is rubit’, and this is the origin of the word rubl’ (ruble). Remaining bits were often melted down and formed back into new torcs, bracelets, rings, etc. 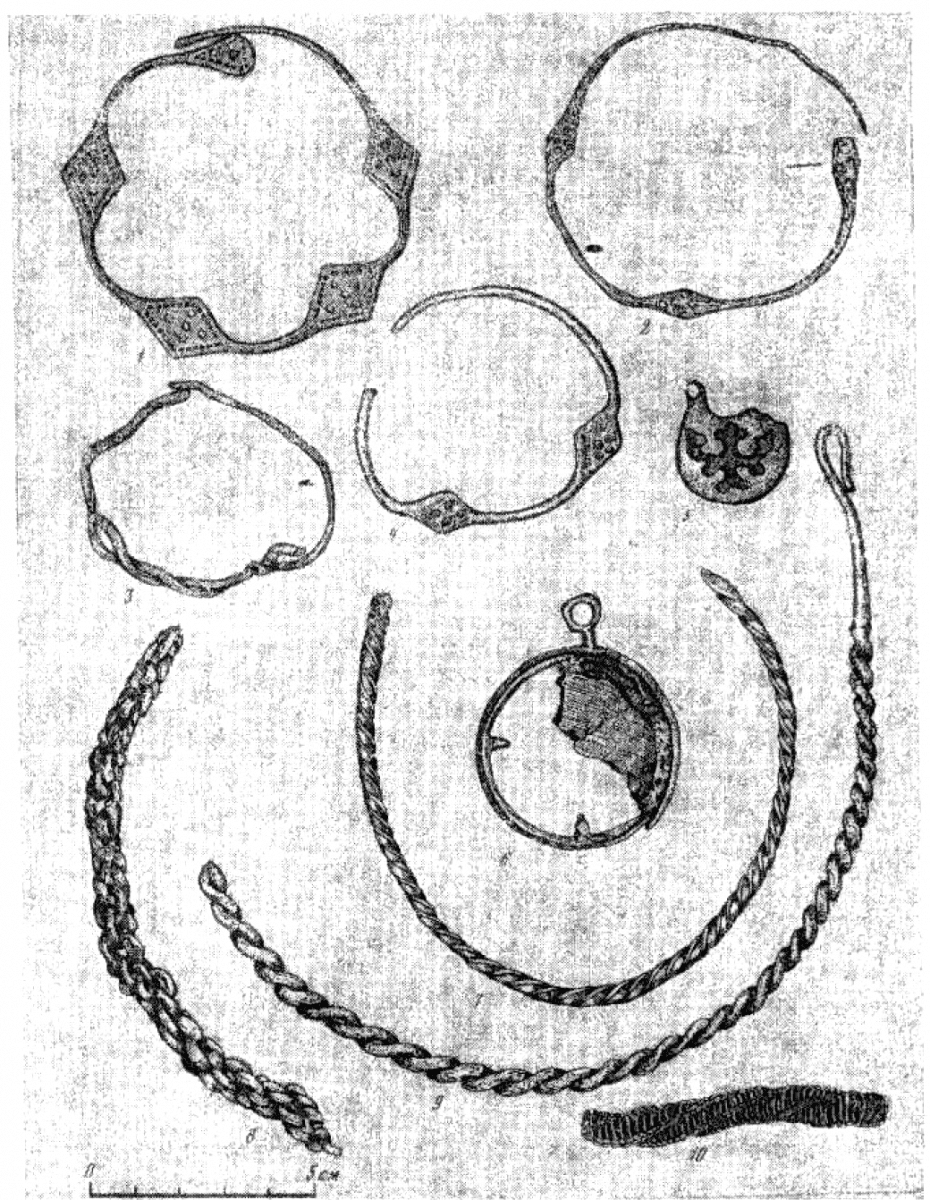 Illustration 1, item 7. The oldest example is a fragment of a twisted, silver-plated iron torc with a tetrahedral cross-section (27-34-1375).[3]jeb: See the Introduction for a discussion of how this provenance numbering system works. It was found in a layer from the second half of the 10th century. The ends have not survived. It is 12.5 cm in diameter. Similar torcs were distributed throughout Northern Europe and the Baltic region in the late 9th-early 11th centuries. An especially large number have been found in Sweden. In our country, twisted iron torcs were worn from the late 10th-early 11th centuries. They were items of Scandinavian import.

Illustration 1, item 10. This fragment of a torc, found in a layer from the mid 13th century, consists of an iron rod, which has been completely covered with braided billon wire (13-22-830).

Illustration 1, items 8, 9. Fragments of two plaited bronze torcs, discovered in the late 12th-early 13th century layer of the Tikhvinskij dig, located 50 m to the west of the Nerevskij dig. One of them (Tikhv19-45) is plaited 2×3; the other (Tikhv17-3) was plaited from two thick wires, the ends of which were forged into a single wire ending in a hook. Similar torcs were widely distributed across the territory of Rus’ in the 11th-12th centuries.